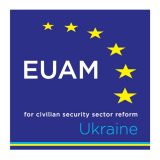 The European Union Advisory Mission (EUAM) Ukraine is a non-executive mission of the European Union that formally began operations from its headquarters in Kyiv on 1 December 2014, following the Maidan revolution of 2013/14 and an invitation issued by the Ukrainian government.

EUAM Ukraine aims to assist the Ukrainian authorities towards a sustainable reform of the civilian security sector through strategic advice and practical support for specific reform measures based on EU standards and international principles of good governance and human rights.

The goal is to achieve a civilian security sector that is efficient, accountable, and enjoys the trust of the public.

The civilian security sector is comprised of agencies responsible for law enforcement and rule of law, such as the Ministry of Internal Affairs, National Police, Security Service of Ukraine, State Border Guard Service, General Prosecutor’s Office, local courts, anti-corruption bodies with roles also played by civil society and the parliament of Ukraine.

A team of over 300 Ukrainian and international staff based principally in Kyiv – with presences also in Kharkiv, Lviv and Odesa – deliver the EUAM mandate, which is implemented according to three pillars of activity: