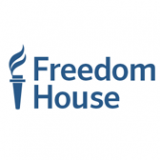 Freedom House is an independent watchdog organization dedicated to the expansion of freedom and democracy around the world.

We analyze the challenges to freedom, advocate for greater political rights and civil liberties, and support frontline activists to defend human rights and promote democratic change. Founded in 1941, Freedom House was the first American organization to champion the advancement of freedom globally.

We recognize that freedom is possible only in democratic political environments where governments are accountable to their own people; the rule of law prevails; and freedoms of expression, association, and belief, as well as respect for the rights of minorities and women, are guaranteed. More than 2.5 billion people live in countries that Freedom House designates “Not Free,” more than a third of the globe’s population.