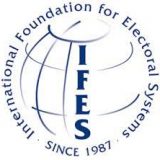 The International Foundation for Electoral Systems (IFES), a non-profit international organization, supports citizens’ right to participate in free and fair elections. Our independent expertise strengthens electoral systems and builds local capacity to deliver sustainable solutions. As the global leader in democracy promotion, we advance good governance and democratic rights by providing technical assistance to election officials, and by empowering the underrepresented to participate in the political process. Since 1987, IFES has worked in over 145 countries – from developing democracies, to mature democracies.

IFES works to foster discussion on electoral law reform, build the capacity of civil society to analyze and advocate on election law issues, ensure Ukraine’s ability to enact critical political finance reforms and strengthen the capacity of election officials through technical assistance to the Central Election Commission (CEC). IFES support has focused on both the process and content of reform by promoting inclusive dialogue among stakeholders and providing technical assistance in the development of legislation consistent with international and European standards. Dovetailing with election law reform is the objective to improve transparency and oversight of political finance. IFES has been directly involved in the conceptualization and drafting of reform legislation, including recent efforts to reform the Law on Local Elections and comprehensive political finance reform. In addition, IFES is working with local civil society organizations to develop and promote measures that address women’s underrepresentation in Ukrainian politics and make local and national elections more accessible to persons with disabilities.